In coming years, more than 20 million skilled trade workers will retire from the American workforce—leaving gaping holes in the fabric of manufacturing, infrastructure, engineering, mechanics, healthcare, and more. In the United States, there are currently 10 million young people who will enter the workforce, all potentially qualified to enter these industries. That leaves the gulf between the jobs that need to be filled and the number of workers needed to fill them wider than ever, and growing.

This equation is a familiar one for Brett Melvin, founder and executive director of Bridging America’s Gap (BAG)—a national workforce development program diligently making an effort to connect the workers of tomorrow with the skilled-trade organizations of today. Melvin began working to address the skills gap dilemma in the crane and rigging industry in 2014 when he was selected by the Specialized Carriers & Rigging Association to help develop and lead what would eventually become Lift & Move USA—an industry-led organization aimed at closing the skills gap in the crane, rigging, and specialized transportation industries. As Melvin worked to develop Lift & Move, he saw that the crane and rigging industry isn’t unique in the workforce challenges it faces. A seed was planted and an idea began to take shape. 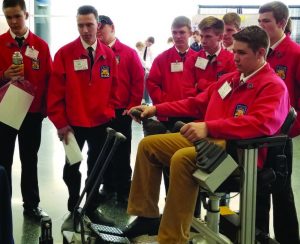 As Melvin knew, and the people he worked with as part of Lift & Move began to see, the people gap is just one part of the problem. There’s a knowledge gap to contend with as well. According to the 2013 McKinsey report Education to Employment: Designing a System That Works, there is a major disconnect between education and business. Over 70 percent of educators believe that students are ready to work on day one of their new job, but less than 50 percent of either students or businesses would agree with that statement. Perhaps even more alarmingly, the McKinsey Global Institute estimates that, by 2020, there will be a global shortfall of 85 million high- and middle-skilled workers.

ACCORDING TO THE 2013 MCKINSEY REPORT EDUCATION TO EMPLOYMENT: DESIGNING A SYSTEM THAT WORKS, THERE IS A MAJOR DISCONNECT BETWEEN EDUCATION AND BUSINESS. OVER 70 PERCENT OF EDUCATORS BELIEVE THAT STUDENTS ARE READY TO WORK ON DAY ONE OF THEIR NEW JOB, BUT LESS THAN 50 PERCENT OF EITHER STUDENTS OR BUSINESSES WOULD AGREE WITH THAT STATEMENT.

In 2017, after several years focusing solely on the crane and rigging skills gap, Melvin began thinking more deeply about the broader challenge the two-fold skills gap posed. The name Bridging America’s Gap (BAG) popped into his head, and after finding the website domain name unclaimed, things progressed quickly. Before he knew it, he was filling out the paperwork to register BAG as a nonprofit organization. By the start of 2018, Melvin was able to give BAG his full attention; by February of that year, the first BAG website was up and running and the first partners had signed on. The organization received its official 501(c)(3) designation just four months later.

Melvin pointed to the current state of affairs created by the existing “college for all” solution the U.S. has promoted as the genesis of the skills gap dilemma. In other countries, education is handled in a different way. “Students are tested early on to find out what will work best for them and are then encouraged to follow an appropriate career path,” he explained.

“Currently, we have over fifteen million high school students in the United States. Over thirty percent (about five million) have no plans to pursue a post-secondary education upon graduating. Of the ten million young people that do go on to college, approximately forty percent will not receive a degree within six years of starting college, but they will have college debt averaging well over thirty thousand dollars each. That is both a national tragedy and a national crisis at the same time.” 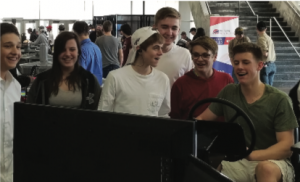 Melvin and BAG call the trades skills “… a natural answer to both the tragedy and the crisis.” Unfortunately, the trades “… have become a ‘bad word,’” Melvin said. “As a result, it’s become common in the U.S. for people to enroll in four-year colleges or universities rather than applying for skilled trade positions. Then they leave a short while later with a lot of debt and, in many cases, no clear sense of what they want to do.”

As a non-profit organization, BAG works to align all sides of a given industry to a shared vision, and then lead them in the development of a solution to their skills gap challenge. The effort involves collaboration with students, educators, and businesses, and the end goal is to bring the next generation to the skilled trades industries in the necessary numbers.

This is approached through a number of initiatives, and Melvin likens the process to coaxing two shy people into talking to each other. One of the primary BAG initiatives is the Career Skills Event, in which students from local schools and community colleges spend a half-day at a member business’ facility, moving quickly through a series of education stations and hearing direct testimony from industry professionals. Participants learn about career opportunities while getting hands-on experience.

The hope is that with a clear window into what the various trades entail within their respective day-to-day activities, and the professional elements (good salaries, robust benefits packages, and opportunities for growth and advancement) that place these jobs in a desirable position, students may come to find them much more attractive—and maybe even a better fit than a four-year-college education path.

“WE WORK DILIGENTLY TO BRING TOGETHER YOUNG PEOPLE AND EDUCATORS WITH EMPLOYERS TO HELP BUILD A LONG-TERM ENTRY- LEVEL EMPLOYEE PIPELINE.”

“WE WORK DILIGENTLY TO BRING TOGETHER YOUNG PEOPLE AND EDUCATORS WITH EMPLOYERS TO HELP BUILD A LONG-TERM ENTRY- LEVEL EMPLOYEE PIPELINE.”

Because BAG is working to alleviate the skills gap in a number of industries, the organization has to work hard to ensure that its approach is as dynamic and varied as the industries it serves. Melvin noted that while the Career Skills Events are among BAG’s initiatives, there are no two events that are exactly alike.

“Depending on the event and the partner we’re working with, we focus more heavily on either building business participation or attracting student attendees,” he said. “There is no one way, but a multitude of logical attempts each time until we find a way that works best. The exact same way rarely works twice in a row. Educators and students and businesses know they need each other, but aren’t sure how to get the conversation started.”

The good news: the hard work being implemented by BAG and other workforce development organizations like it is beginning to show signs of productivity. Melvin pointed out that educators and other key players in the education system are “starting to wake up” and recognize the problem. Additionally, the government is taking the time to sit down and ask skilled and experienced minds to address the challenge of the skills gap.

Melvin was recently invited to represent BAG by participating in a Department of Education program called ReThink CTE, where “CTE” stands for Career and Technical Education. A number of key CTSOs (Career and Technical Student Organizations) like Future Farmers of America and SkillsUSA were in attendance; scholars described the current landscape and applicable circumstances in the relevant industries before roundtable discussions took place. The goal was to make positive movement in addressing the issue of how CTE is taught in American schools. ReThink CTE wasn’t the first time BAG and CTSOs have come together to address these issues, and Melvin hopes it won’t be the last.

THE HOPE IS THAT WITH A CLEAR WINDOW INTO WHAT THE VARIOUS TRADES ENTAIL WITHIN THEIR RESPECTIVE DAY-TO-DAY ACTIVITIES, AND THE PROFESSIONAL ELEMENTS (GOOD SALARIES, ROBUST BENEFITS PACKAGES, AND OPPORTUNITIES FOR GROWTH AND ADVANCEMENT) THAT PLACE THESE  JOBS IN A DESIRABLE POSITION, STUDENTS MAY COME TO FIND THEM MUCH MORE ATTRACTIVE. 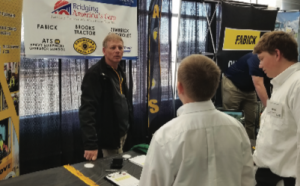 In addition to participating in ReThink CTE, BAG has focused on multiple aspects of workforce development, working early on with the USA Workforce Coalition as well as Congressman Lloyd Smucker (R-PA) to help create and promote the Workforce Development Tax Credit (H.R. 1739). BAG has thus far worked most closely with SkillsUSA in Wisconsin and Indiana, but has growing partnerships with the Association of Equipment Manufacturers (AEM) and others.

This October, at the Association of Equipment Manufacturer’s ICUEE 2019, a special careers day will take place on the last day of the show. Hundreds of high school students will be able to see firsthand the many rewarding industry careers available. Melvin considers this upcoming event a major opportunity for BAG. The takeaway he’s aiming for is reflective of the overall change in mindset he says is critical for the progression towards eliminating the skills gap.

“The ICUEE event is going to be really exciting for us as an organization, since it’s the first time we’ll be bringing students to a major trade show to see firsthand the excitement of an industry that wants them,” he maintained. “As adults, many of us have been to more trade shows than we can count. But think back to the first time you walked into a really big trade show that was filled with things that interested you. [These students] will be experiencing North America’s largest construction and utility trade show while BAG is also holding our CSE with Learning Stations and Champions sharing all about the industry and the opportunities available to them. They will have the chance to visit booths, spend time watching equipment demonstrations—and hopefully walk away thinking: ‘Wow, this is where I need to be!’”