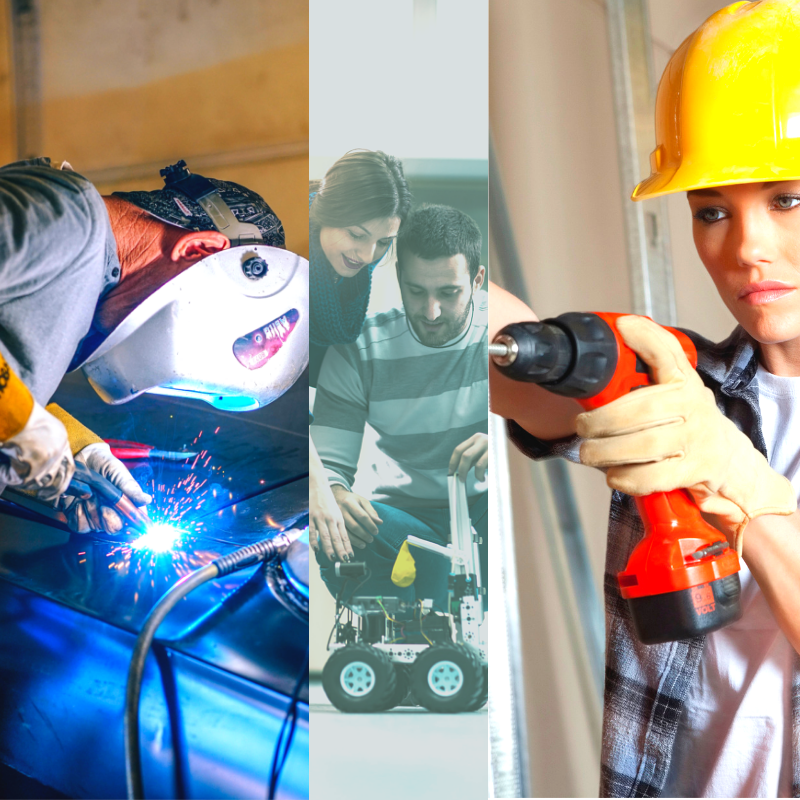 How to Become a Skilled Tradesperson

The trades are hiring! The most important requirement? Wanting a career.

via popular mechanics
by Roy Berendsohn

The demand for most trades is strong and getting stronger. The U.S. Department of Labor forecasts healthy growth in the neighborhood of 8 to 9 percent over the next decade. Jobs associated with building and rebuilding roads, bridges, water, and the power grid are expected to grow by double-digit percentages—faster than the overall economy. Jobs for plumbers, pipefitters, and steamfitters are projected to grow 16 percent during this same time period. And projected employment growth across all occupations is 7.4 percent. Construction, the mechanical trades, and industrial occupations like welding are in-demand trades that could mean either a stable career or a launching pad. You might start out swinging a hammer but it could lead to project management, environmental analysis, sales, education, or engineering. I met a bunch of these people in the course of writing this article. And, by the way, that’s how I found my way here. This story is going to tell you how you can do it, too. (Check out our companion article, The State of American Trade Schools, for more info.)

“The trades are not merely an alternative to college. A trade is equal to college.”

The postwar era in America was one of unparalleled white-collar growth. Thus both public and private high schools were deemed most successful if they graduated students to college. But college costs have risen sharply and continue to rise. Forbes concluded a year ago that college tuition is rising nearly eight times faster than wages. A four-year degree is still deemed valuable, but you’ve got to be able to afford it with a minimum of debt and it has to be the basis of a well-paying job when you exit. If not, you’re stuck.

Given a decades-old institutional bias toward college, it’s not surprising that trades teachers feel like they’re constantly playing second fiddle. “Our biggest challenge today is that guidance counselors push every student into college,” says Jim Reid, director of apprenticeships for the International Association of Machinists and Aerospace Workers (IAM). Tim Baber, professor of manufacturing technology at College of the Canyons in Santa Clarita, California, echoes that. Speaking about his high-school-age son, he says, “All he hears is college, college, college.” Oddly enough, the trades bear some responsibility. As the construction industry waxed and waned over the years, one of the places it looked to cut costs was training. This led to a shortage of helpers and apprentices. “Journeymen did everything themselves. That worked for a while, but you see where that got us,” says William Fuller, craft development manager for the Houston-area Construction and Maintenance Education Foundation, the educational affiliate of the trade association Associated Builders and Contractors (ABC). Fuller should know. He was recently named Craft Instructor of the Year, no small achievement for a guy who started out at 13 digging ditches with a shovel. He went on to become a heavy-equipment operator, carpenter, boilermaker, rigger, and crane operator.

ABC contractors are also on the front lines of getting students prepared as early as possible, while they’re still in high school. Trained high school graduates are deemed “trade ready” when they can read a set of plans, set up a job, and work with journeymen. They may stay with their trades training to pursue journeyman status, exit to college, or pursue both. A blended profession consisting of college and trades education that’s achieved incrementally, without college debt, is appealing to many and a smart way to hedge your bets. “The trades are a way to earn and learn,” IAM’s Reid says. “They’re a way to still have college available to you. It’s a way to secure your future.” He started out as an auto-body mechanic, became a machinist, and went on to get two bachelor’s degrees, one in labor studies and another in education.

Another example of the trades-college track is our longtime trades advisor, Pat Porzio, a second-generation tradesman with three trade licenses (electrical contractor, master plumber, and master HVAC); he also has a bachelor’s in mechanical engineering. Today he’s HVAC manager for Russo Bros. & Co., a plumbing and HVAC company in East Hanover, New Jersey.

Finally, consider Dan Maurer, a journeyman pipefitter with United Association Local 190, a plumber and pipe trades union in Ann Arbor, Michigan. He’s one class away from an associate degree in applied science. He left general construction and carpentry to pursue the mechanical trades and today does welding, plumbing, and medical gas piping for Boone & Darr, a mechanical contractor in Ann Arbor. A rock-solid middle-class breadwinner, Maurer is the sole support for his stay-at-home wife and two young daughters, no small feat today for any young family.

A future in the trades begins even before you graduate high school, he says: “Pay attention while you’re in public school to the education that’s right in front of you. It’s free. It’s a gift. When you go on from there to pursue a trade, remember that whatever you put into it is what you get out of it.”

I’ll leave the final words of advice and encouragement to Greg Sizemore, ABC’s vice president of environment, health, safety, and workforce development. His advice is directed as much at the parents as the students. “Parents shouldn’t push kids who are performing poorly in the classroom toward a future in construction, assuming that the student won’t need math or communication skills. We want not only the best student, we want the right student.”

“The trades,” said Sizemore, “are not merely an alternative to college. A trade is equal to college. If you’re a Ph.D. and you’re at home on a Saturday night in July and your air conditioner quits, the smartest person around is somebody who can fix that air conditioner. The trades are one of the most noble career choices that any individual can make. Banks would not be built. Buildings to house machines, hospitals, and any other structure would not be built without the trades. It’s a career choice, not just a job.”