Is This the End of College as We Know It? 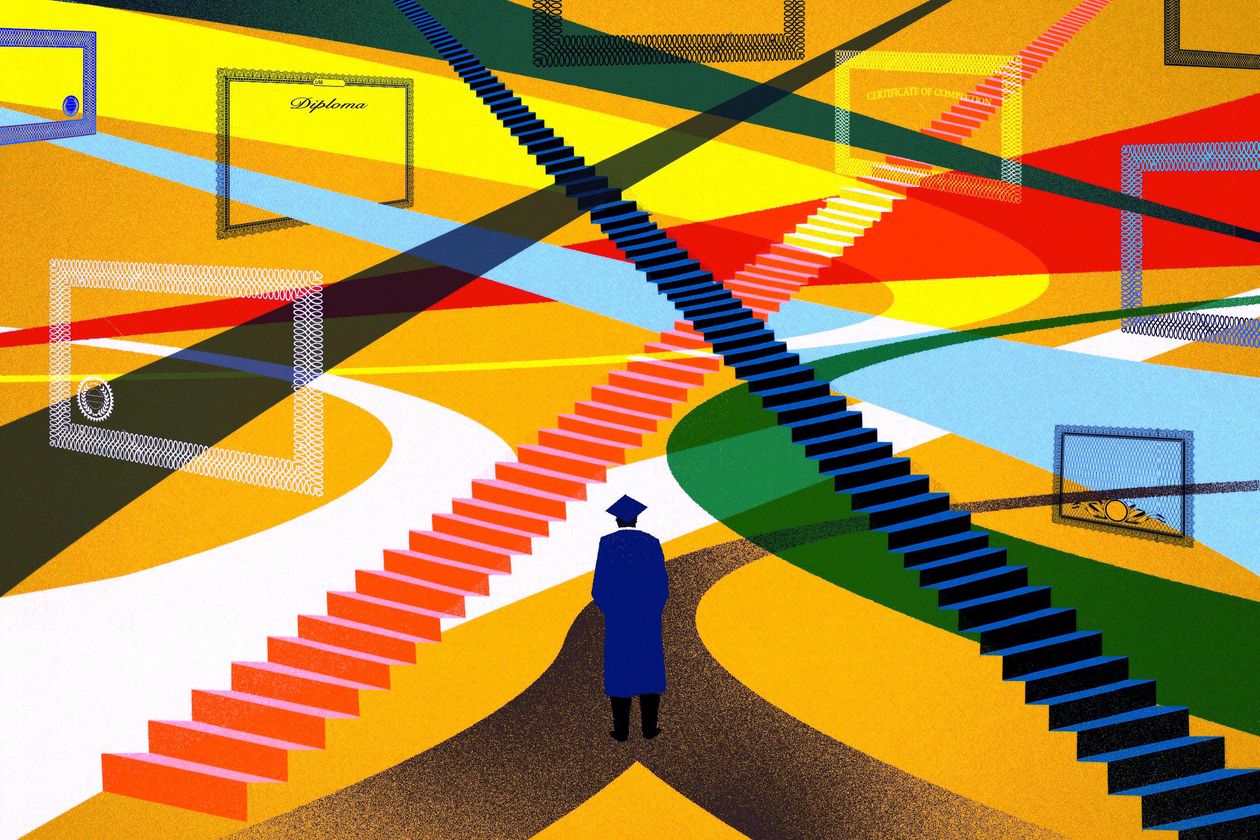 For millions of Americans, getting a four-year degree no longer makes sense. Hereʼs what could replace it.

Rachael Wittern earned straight As in high school, a partial scholarship to college and then a Ph.D. in clinical psychology. She is now 33 years old, lives in Tampa, earns $94,000 a year as a psychologist and says her education wasnʼt worth the cost. She carries $300,000 in student debt.

Dr. Witternʼs 37-year-old husband worked in a warehouse for several years before becoming an apprentice electrician. He expects to earn comparable money when heʼs finished—minus the debt. When and if they have children, Dr. Wittern says her advice will be to follow her husbandʼs path and avoid a four-year degree.

“I just donʼt see the value in a lot of what I studied,” she says. “Unless they have a really specific degree in mind weʼd both prefer they take a more pragmatic, less expensive route.”

For traditional college students, the American postsecondary education system frequently means frontloading a lifetimeʼs worth of formal education and going into debt to do it. That is no longer working for millions of people, and the failure is clearing the way for alternatives: Faster, cheaper, specialized credentials closely aligned with the labor market and updated incrementally over a longer period, education experts say. These new credentials arenʼt limited to traditional colleges and universities. Private industry has already begun to play a larger role in shaping what is taught and who is paying for it.

For more than a century, a four-year college degree was a blue-chip credential and a steppingstone to the American dream. For many millennials and now Gen Z, it has become an albatross around their necks.

Millennials are the most educated generation in the nationʼs history, but they are broke compared with their predecessors. So why would they direct their children to take the same path?

“They probably wonʼt,” says John Thelin, a historian of higher education and professor at the University of Kentucky.

Faith in the four-year degree traces back to the 1960s, when Civil Rights activists pushed for everyone to attend college and become a professional. Instead of steering students toward a pragmatic, though often racist and classist, two-track system in which some high-school graduates headed to college and others became apprentices in a trade, the nation set a course for something more aspirational: college for all.

High schools began to direct students toward college-prep classes and away from vocational training. The federal government started lending money to many more students to pay for college. Universities grew into manicured playgrounds. The proportion of Americans with a four-year college degree climbed to 36% last year from 9% in 1965.

But those gains came at a price. For every high-school student who graduates college and finds a job that leverages her degree, four fall short: They either never enroll in college, drop out, or graduate and wind up underemployed, says Oren Cass, executive director of American Compass, a conservative think tank. About half take on debt they come to regret, according to surveys. For millennials, college or bust created winners out of about 20% of the countryʼs students, and bust for the rest, Mr. Cass says.

What has embittered so many millennials is that they played by the rules and still got stuck. Ben Puckett, a 30-year-old pastor in Michigan, earned a B.S. in physical therapy before a Masterʼs degree in divinity. He is $95,000 in debt.

“I went to college because I was told by parents, friends, teachers and counselors that it was the only way to ensure a good future,” Mr. Puckett says. “At 18 years old, how was I supposed to defy what my school, parents, society, friends were saying about going to college?”

College graduates born in the 1980s are less able to build wealth compared with earlier generations. Since 2013, student debt has grown by around $600 billion.

The flagging value proposition is now catching up to colleges.

Between 1979 and 2010, enrollment at two- and four-year colleges and universities more than doubled to 18 million. Since then it has fallen by about 2 million as the number of high-school graduates shrinks and the return on investment for graduates flattens.

To adapt, more schools are offering larger tuition discounts, forcing many of them to cut costs, edging them closer to a death spiral. The pandemic and the resulting economic anxiety have accelerated these trends. Many colleges are unable to adapt their programs and to keep up with changing demands in the labor market. Hundreds of schools will close over the next few years, analysts predict.

Americans arenʼt turning their backs on education; they are reconsidering how to obtain it. Enrollment in short-term credential classes during the pandemic increased by 70% to nearly 8 million over the same period last year, according to Jonathan Finkelstein, chief executive of Credly, a digital credentialing network. That increase came as freshman college enrollment dropped by 16%.

Coding boot camps, which started only a decade ago and teach students software skills in a few months, graduated around 30,000 students in the U.S. last year. The number of apprenticeships nearly doubled to more than 700,000 between 2012 and 2019, according to the Labor Department, and they are expanding beyond trades into white-collar industries like banking and insurance. California has plans in place to increase apprenticeships in the state to 500,000 from 75,000 by 2029.

Companies like Alphabet Inc.ʼs Google, Amazon.com Inc. and Microsoft Corp. are launching programs which certify vocational competence and lead to well-paying tech jobs in or outside their companies. In August, Google announced scholarships for 100,000 students for a six-month online certificate including one in data science. The company said it would treat the certificates as the equivalent of a four-year degree if students apply for a related role at Google.

As a critical mass of companies and nonprofits launch their own credentials that become valuable in the labor market, traditional colleges will lose their monopoly, says Christopher Dede, a professor at Harvard Graduate School of Education and the author of “The 60-Year Curriculum.”

“The minute you have enough groups from industry, or the military or nonprofits, validate these things, you provide a way of bypassing educational institutions, and that will open the door to people not having to get a bachelorʼs degree as a warrant to enter the workplace,” Mr. Dede says.

The question is whether this model can supplant the massive symbolic value of a four-year degree earned straight after high school. A 2019 Kaplan Inc. survey of 2,000 parents found that 74% favor a pathway for students to go straight from high school to a full-time job while taking college classes.

Whatʼs missing from this rising model is the sort of coming-of- age experience that students crave. Still, the pandemic has chipped away at the belief that it must take place through a four-year stint on a college campus. Groups of students unable to return to campus this year have rented houses and hotels to live with their classmates while taking classes online.

Elite schools like Harvard and Yale University will survive and even thrive but will occupy a smaller place in the popular imagination, much like prep schools today, says Johns Hopkins political scientist Benjamin Ginsburg.

Less elite schools trying to stay relevant have begun offering shorter programs and creating longer partnerships with students, such as giving alumni the chance to brush up on skills through online classes. Four-year degrees will get telescoped into three and eventually two years, says Scott Pulsipher, president of Western Governors University. Academic credit will increasingly be given for work experience, and workers will return to school more frequently as the half-life of their skills shortens because of the accelerating pace of technological change.

The shift will eventually generate Americans with more education from a broader array of institutions. That will create pressure for public funding to follow the education people want, says Mr. Cass, author of “The Once and Future Worker.” Federal and state governments subsidize colleges and universities with hundreds of billions of dollars. That money benefits just a sliver of students. What about everybody else?

Mr. Cass argues students should be able to apply to whatever type of education or training they want to pursue. “College-for-all has been a catastrophically bad system,” he says. “It has to change.”