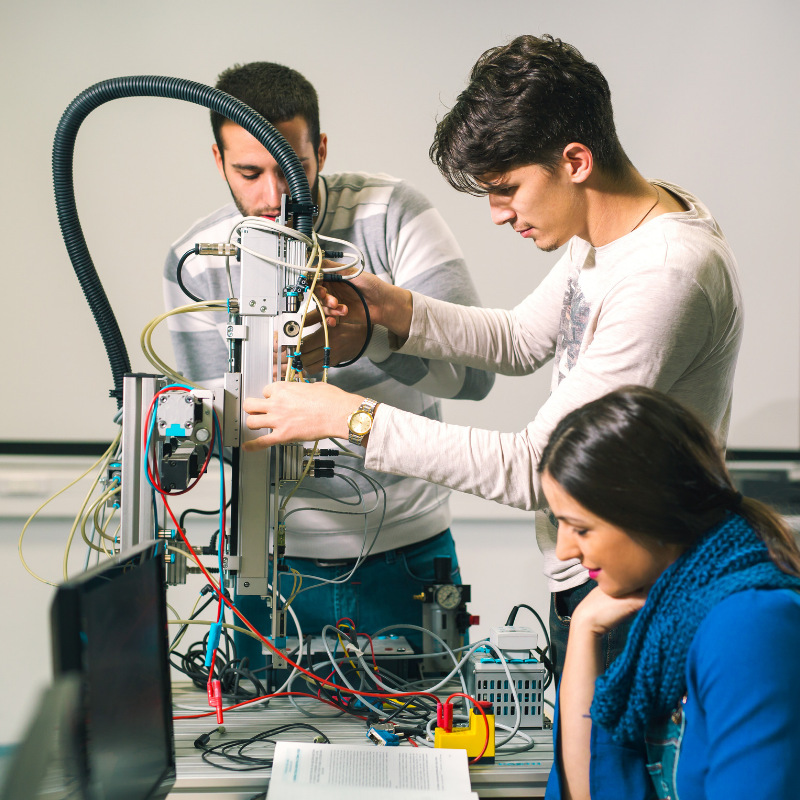 Taking the Future of Manufacturing Into High Schools

via nytimes.com
By Nick Leiber

ANNA, Ohio — In early May, in a classroom at Anna High School, five seniors focused on controlling a canary yellow robotic arm. They took turns tapping code into a pendant connected to the arm.

Their assignment was to make the arm grab and move a bunch of AA batteries, one by one, from one box to another. Along the way, the arm was supposed to circle each battery inside an empty Folgers coffee canister, then return it to its original position without knocking any over.

Something in their code was off, though, and a few of the batteries wobbled and fell. The students, who were learning about industrial robots and other technologies used in advanced manufacturing, took the hiccup in stride, examining lines of code for errors and cracking jokes. Their teacher, K. C. Needles, offered encouragement, but didn’t tell them how to fix their mistake.

One of the students, Jarred Seigle, liked how their task was similar to what he’d seen robots do on assembly lines in Honda’s engine plant a few miles outside the center of the village. “This is something we could all be doing in a few years if we’re working in a factory,” said Jarred, 18, who is planning to major in mechanical engineering at the University of Toledo. “We might be programming robots.”

The school, in a tightknit farming village about 50 miles north of Dayton, is among secondary schools around the world that offer robotics classes and related disciplines to prepare students for industries being transformed by automation.

The schools are adapting educational materials developed by manufacturers and building special labs. The idea is to give the students a foundation in how industrial technology works and, in some cases, expose them to manufacturing careers.

Robots could eliminate 75 million jobs globally by 2022 and create 133 million others, according to a World Economic Forum report released last year. Global manufacturers could also face a potential shortage of 7.9 million workers by 2030, warns a study released last year by the consulting firm Korn Ferry.

Because of negative perceptions about factory work, making it appealing is a global challenge, said Rob Luce, vice president of the SME Education Foundation, the philanthropic training arm of the manufacturing trade group SME. The foundation helped start the Anna program and nearly 50 others like it in American high schools.

“The nation that figures it out first is going to be in the front position to capitalize,” Mr. Luce added.

Manufacturers’ need for people who can operate, troubleshoot, maintain and install robotics and automation technology “is going to grow in the future,” said Scot McLemore, manager of talent acquisition at Honda North America. Automation equipment is increasingly being adopted by sectors outside of auto manufacturing, which has used robots for decades.

The factory perception problem is thorny, Mr. McLemore said. Unless parents have a personal connection to someone working in manufacturing, “they either have no idea what happens or they have a misperception that it’s dark, dirty and dangerous, which is definitely not the case,” he said.

Amelie Haves, 14, has been enjoying operating the arm in her robotics course at Hans-Dietrich-Genscher-Schule, her middle school near Bonn, Germany. “It looks difficult, but it isn’t that difficult to program a robot,” she said.

Amelie prefers to learn by looking and touching instead of by reading. “Our future is going to be involved with all of this technology,” she said. “All the big companies that produce anything now have robots.”

The school’s goal is for participants to gain a foundation in programming and operating industrial robots. Students can earn a certificate that recognizes their proficiency in operating a robotic arm from the Japanese manufacturer Yaskawa — the same certificate as adults.

Amelie’s mother, Sheona Hamilton-Grant, pushed her daughter to enroll in the two-year course. Ms. Hamilton-Grant likes how closely Yaskawa is involved and how girls and boys gain confidence applying robotics in practical ways.

“Rather than run away from something we’re frightened of, we need to learn about it, from industrial applications to ethics,” she said. “Knowledge is power, isn’t it?”

Christian Zimbelmann and Hans Werner Meurer, Amelie’s teachers, structure the course around practical problems, such as moving toy bricks from one place to another by programming the arm.

“We can’t let students go out into the work force without the foundation to handle complex automated systems,” Mr. Zimbelmann said.

The course is an idea that Ulla Engelmann, head of the unit for advanced technologies, clusters and social economy at the European Commission in Brussels, said could be replicated across Europe. She saw it in action when Yaskawa invited teachers and students to participate in a major industrial technology trade fair in Hanover, Germany, in April.

“There are so many fear factors when you talk about robotics,” Ms. Engelmann said. This program diminishes those fears and shows robots can make your “future work life easier.”

In Mexico, government education officials seem increasingly willing to have public schools teach robotics, said Roberto Saint Martin, a founder and the chief executive of RobotiX, a robotics education business, which started in 2006 in Mexico City. The company said it had implemented its programs in more than 1,400 schools and learning centers in Mexico.

RobotiX sends its instructors to schools and also trains teachers — more than 1,600 have gone through its training. The traction is driven in large part by parents, said David Romero, a professor at Tecnólogico de Monterrey, the elite Mexican university where Mr. Saint Martin helped hatch the idea for RobotiX.

“Parents get that if their kid wants employment in the future, she or he should be able to design, program, and repair a robot,” Mr. Romero said.

Businesses aren’t going to stop automating, said Miae Lee, a teacher at Seoul Robotics High School, a competitive technical school with about 460 students. “We have to adapt ourselves,” she said. “I tell my students, ‘If you learn about the robots, you can get a good job after graduation.’”

Because the school has dormitories for about one-third of its students, some tinker with equipment until 10 at night. For their final project before they graduate, students work in small groups to build their own robots.

The goal is to convert the students into robotics experts, said Ms. Lee, who teaches upper grades. “They have to choose: Do you want to lose your job to a robot or do you want to be hired to make or control it?”

Anna installed its robotic arm in 2018, a few years after executives from SME Education Foundation and Honda approached the school about developing a program together.

Rather than relegate the classes to a vocational career center, its classes with the arm are taught in the main school building, which is undergoing an $18 million renovation that will include an area for robotics.

The school isn’t trying to mint “the perfect employee for Honda,” said Joel Staudter, the principal who, along with Mr. Needles became a certified instructor a few years ago by taking a course offered by Fanuc, the Japanese robot maker. “We’re trying to give them foundational knowledge.”

Jarred said he planned to return to Anna after he graduated from college. He imagined taking a job at one of the community’s several dozen manufacturers, such as Precision Strip, a toll metal processing company, or at Honda’s engine plant.

One of Jarred’s teammates, Isaac Dodds, 18, who is also planning to attend the University of Toledo, doesn’t expect to work in manufacturing. He wants to become a teacher. He took the class with Jarred because he saw gaining skills in automation as job security if teaching doesn’t work out.

“I’ll have robotics in my back pocket if I ever need it,” Isaac said. “Soon every job is going to involve robotics in some way or another.”