The U.S. Furniture Industry Is Back—but There Aren’t Enough Workers 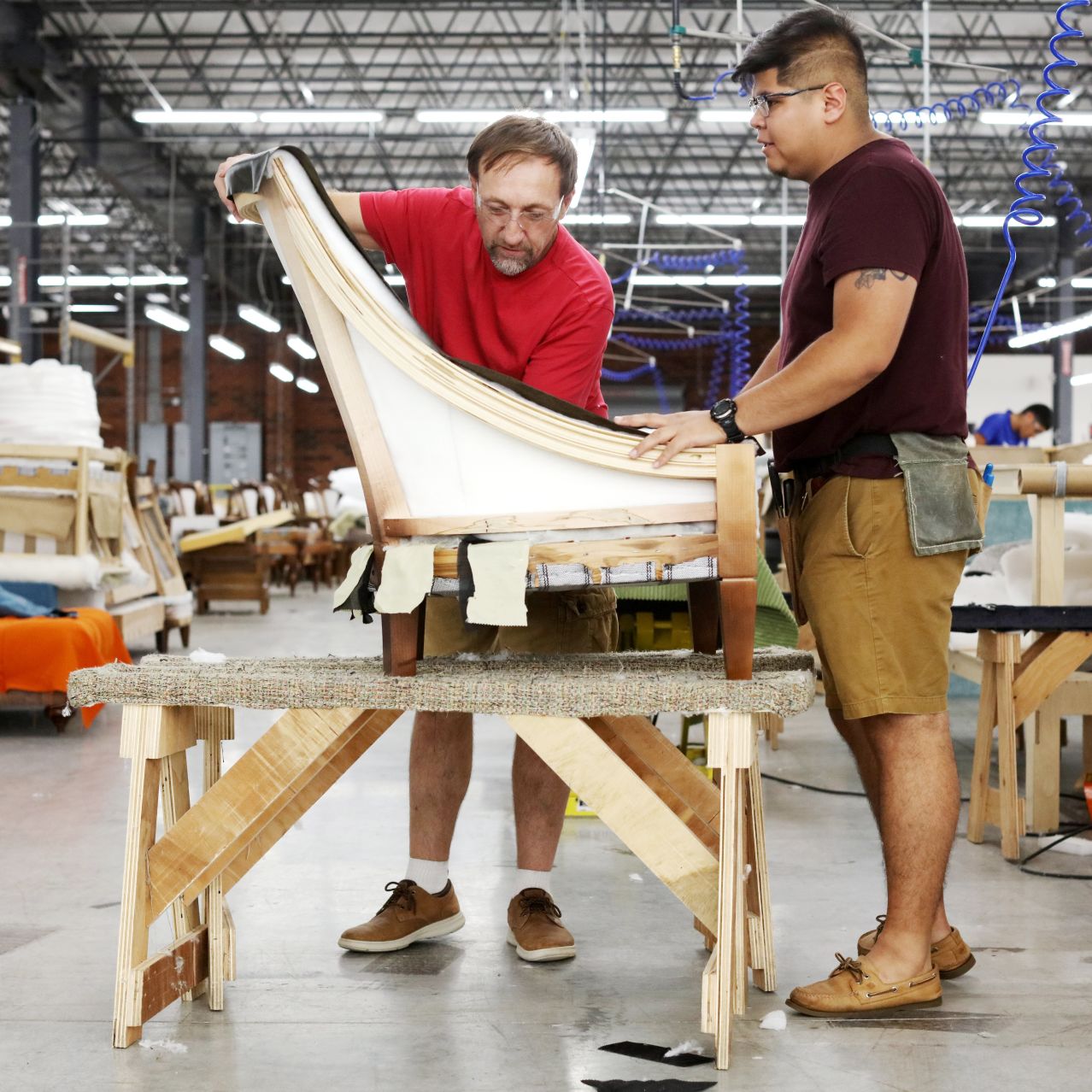 By Ruth Simon
Via wsj.com

HICKORY, N.C—Here’s the good news: There are now more reasons to make furniture in the U.S. than at any point since the financial crisis. Crate & Barrel and Williams-Sonoma Inc. are expanding manufacturing in the U.S., and the factories of longtime furniture makers are humming.

Manufacturers across the country are struggling to fill open slots in a tight U.S. labor market. Furniture companies, which for decades have been hit by competition from China, face special challenges after years of shrinking. A generation of prospective sewers and upholsterers have steered clear of the industry, leaving it heavily reliant on an aging workforce. 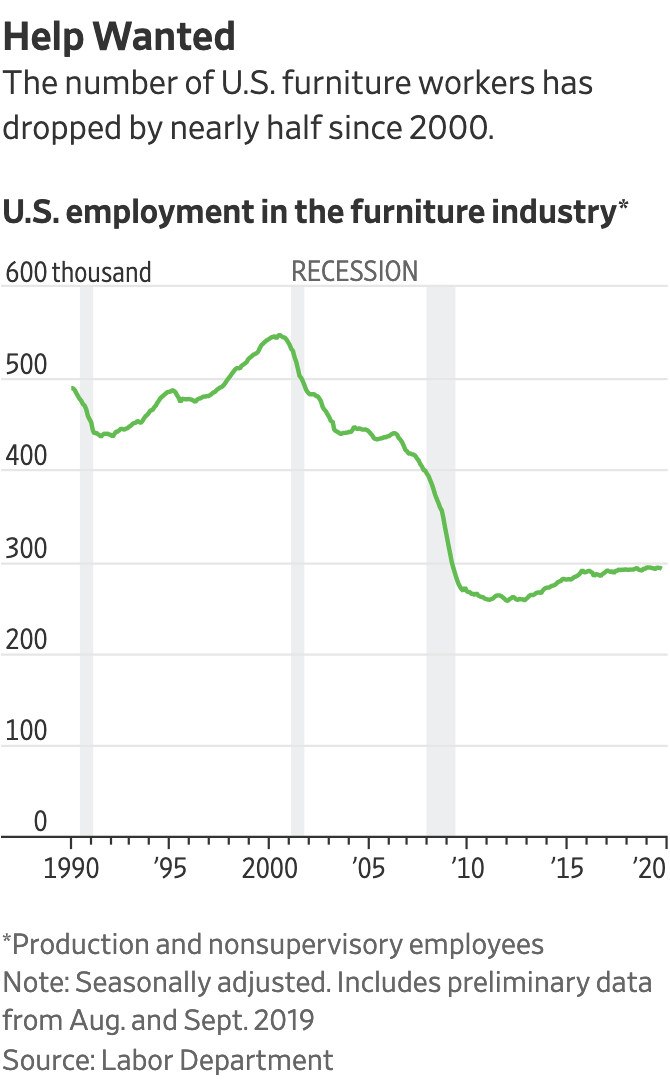 At Century Furniture, based in Hickory, N.C., delivery times have stretched to nearly nine weeks because of the worker shortage, which has caused the company to lose orders.

“I walk around our factories every other day and am spooked by what I see,” said Alex Shuford III, chief executive of RHF Investments Inc., owner of Century and several other furniture brands. “The retirements are coming and I can’t find enough people.”

The turnabout for a once-beleaguered sector has been spurred in part by the internet, which has reshaped shoppers’ behavior and expectations. Consumers demand their choice of fabrics and features but don’t have the patience to wait two months for an item to arrive from Asia. At the same time, tariffs are stepping up pressure on American manufacturers to move production home.

Roughly 90% of dining tables, bookcases and other wooden furniture are now made abroad, according to Mann, Armistead & Epperson Ltd., an investment banking and research firm. But U.S. factories still churn out about half of upholstered furniture sold in this country, much of it in places like Catawba County, in the foothills of the Blue Ridge Mountains.

Custom upholstery requires skilled labor and isn’t well-suited to long production runs of the same items common in overseas factories. Upholstered sofas and chairs are also more costly and difficult to ship than tables and bookcases, which can be easily stacked and reassembled. Shipping a single custom item from overseas can also be too costly.

“Pretty much all the companies that survived the last crisis have been in a growth mode,” said John Bray, chief executive of Vanguard Furniture Co., which has about 600 employees. “When business picked up, there just weren’t enough skilled people.”

Chad Ballard, 28 years old, was building swimming pools and trimming trees in Daytona Beach, Fla., when he decided to move to Hickory and then take a chance on an entry-level job at Century. Now, four evenings a week, he studies upholstery at Catawba Valley Community College in Hickory, a skill that could boost his annual pay to $45,000 within a few years and, if he can master the craft, to $75,000 or more.

Hiring Mr. Ballard was a small victory for Century, which in any given week has about 35 openings for sewers, upholsterers and other trades. “He came to us through a temporary agency,” said Amy Millsaps Guyer, vice president of human resources at the furniture maker. “We won the lottery.”

Furniture makers used to dominate the economies of places like Hickory. But the industry shed roughly 250,000 production jobs from its peak in 2000, leaving about 295,000 such workers in the U.S. today, according to the Bureau of Labor Statistics. 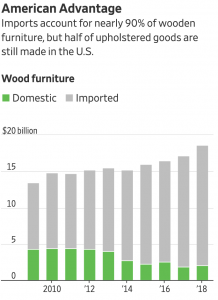 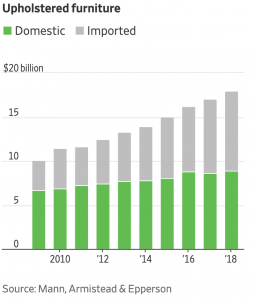 Some older, more experienced workers were able to hang on, but furniture makers largely stopped hiring during the 2008 recession, leading to a dearth of workers ages 35 to 50. In the Hickory area, 42% of sewing machine operators and one-third of upholsterers are 55 or older, according to the Catawba County Economic Development Corp.

“Parents would say, ‘Stay away. You will lose your job,’ ” said Bill McBrayer, director of human resources for Lexington Home Brands, a furniture maker in Thomasville, N.C. “How do we get the young and old to come back to the industry?” 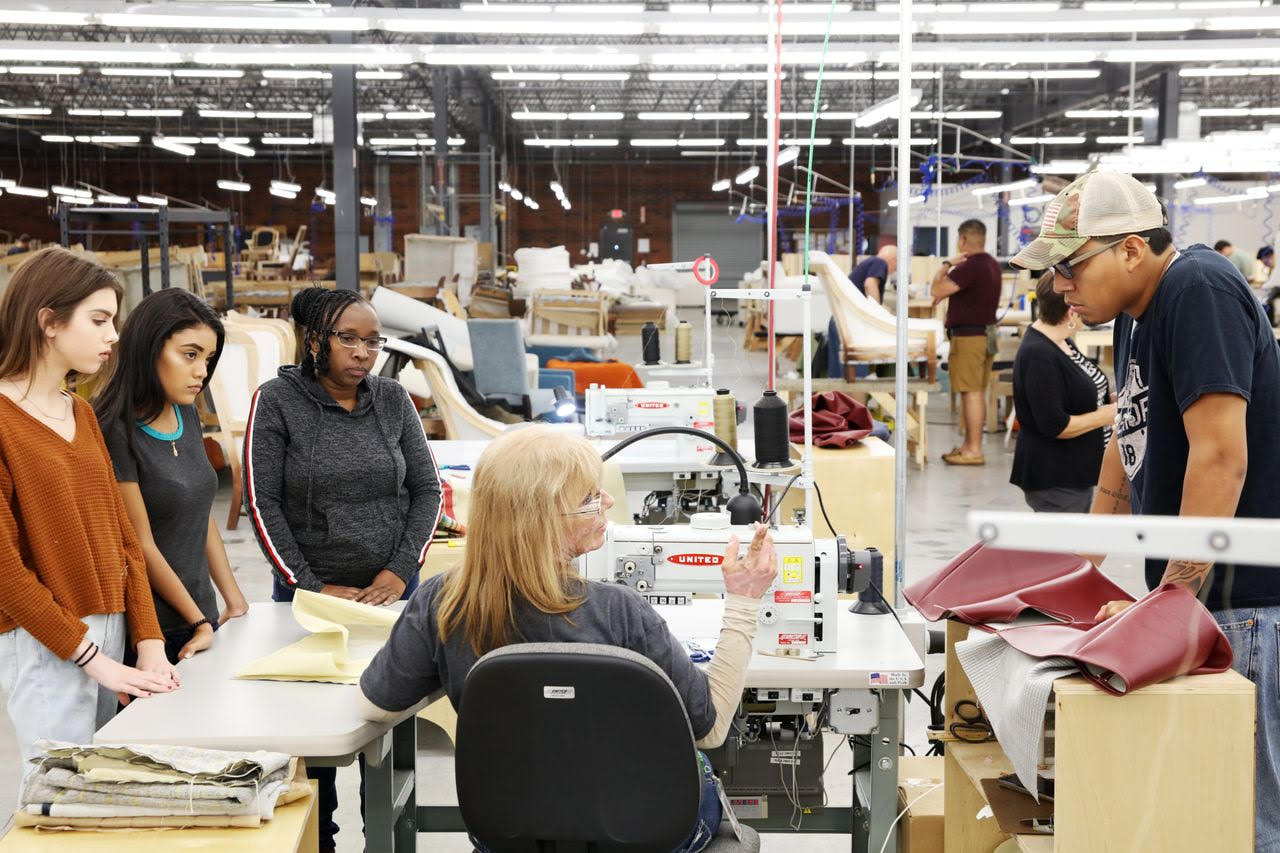 “My dad has been in furniture his whole life,” said Nathaniel Kaylor, a 21-year-old student at the academy. “He told me from the get-go to stay out of it. You get old fast. Go to college.”

“Parents would say, ‘Stay away. You will lose your job,’ ” said Bill McBrayer, director of human resources for Lexington Home Brands, a furniture maker in Thomasville, N.C. “How do we get the young and old to come back to the industry?” 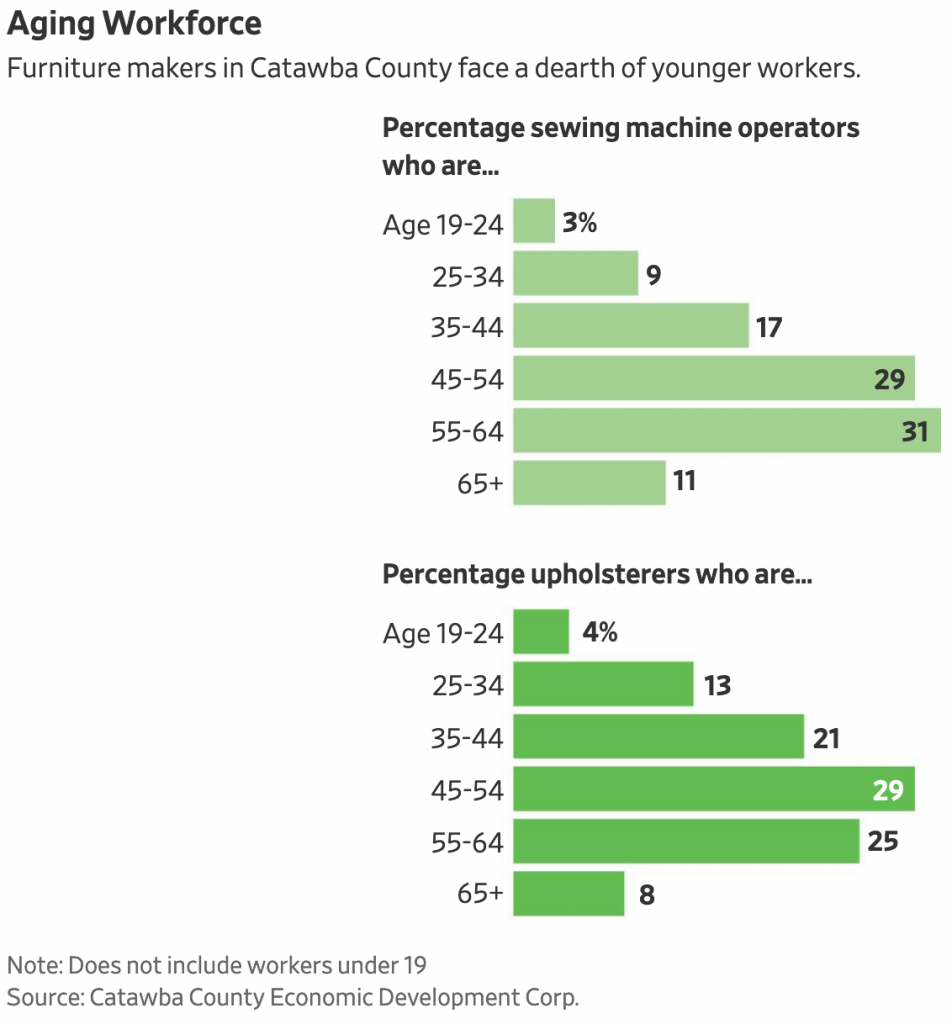 The academy launched in 2014 at the urging of five local companies, which helped develop the curriculum, donated supplies and provided employees whom the college pays to serve as instructors. Students spend eight months studying manual cutting or sewing, at a total cost of around $425; an 11-month upholstery program costs about $600.

Vanguard opened its second manufacturing operation in Hillsville, Va., five years ago because it couldn’t find enough skilled workers in Hickory. To better attract young workers who balk at a 6:30 a.m. start time, Vanguard is looking at how to create a flexible schedule that will allow some workers to have a later start time and still get a full eight hours out of a production shift.

Competition for furniture academy graduates is so keen that Lexington’s Mr. McBrayer sometimes swings by in the evening to get to know the students before graduation. To find recruits, he speaks to parent-teacher organizations, high-school classes and Rotary clubs.

“The toughest question,” the 61-year-old executive said, “is the one that haunts us forever: What makes me think that if my child goes into this industry it will be there in two years?”

The Northbrook, Ill., retailer outsources most upholstered furniture production to three U.S. companies. It recently made its first investment in U.S. manufacturing, working with a Hickory-based startup on a new $3.1 million factory that aims to shrink production time to two weeks.

Chinese companies are also looking to cater to the changing demands of U.S. customers. This fall, Samson Holding Ltd. , which manufactures in China, acquired Southern Furniture, a nearly century-old, Conover, N.C., maker of custom upholstered furniture. “We were only going to take it to the next level by offering special orders, which is difficult to do” from Asia, said Jeff Scheffer, the North Carolina-based chief executive of Samson’s Universal Furniture unit.

Jason Buck, 21, planned to start his furniture studies in mid-July, but classes were delayed until September because there weren’t enough students. At Catawba Valley Community College, 197 students were enrolled in the welding program this fall, nearly three times the 67 studying furniture making.

Williams-Sonoma last year asked the college to create an eight-week training program. The shorter program focused on basic sewing and upholstery skills and was followed by eight weeks of in-house training.

“The labor market is very tight in North Carolina,” said Darryl Webster, the executive in charge of Williams-Sonoma’s manufacturing operation. “I quickly realized that you need to be literally standing there before they graduate offering them a job.”

When Williams-Sonoma opened its fourth upholstered furniture factory this year, a process accelerated by tariffs, it set up shop in Baldwyn, Miss., because of the area’s deep pool of talent. Still, a job fair held at a nearby community college last December produced 200 applicants, but just 15 hires. “Probably 50% didn’t have any experience,” Mr. Webster said.

Bonita Hawkins, 51, had a job offer from Williams-Sonoma in Hickory even before she earned her certificate from the furniture academy in 2016. “All over the city, I see signs looking for upholsterers, for sewers,” said Ms. Hawkins, who made custom clothing in Los Angeles before moving to North Carolina.

Craftmaster Furniture Inc., based in nearby Taylorsville, N.C., recently set out yard signs offering a $2,000 signing bonus for experienced seamstresses. Soon after, a friend told CEO Roy Calcagne that he had spotted the signs in a competitor’s trunk. “It’s every man for himself when it comes to hiring people,” Mr. Calcagne said.

Craftmaster has a doctor and nurse offering free medical care on site four days a week, and gives raises every four weeks to trainees who show improvement. “The old-school way used to be that you were lucky to have a job,” Mr. Calcagne said. “The way we look at it today is we are lucky to have you here.”