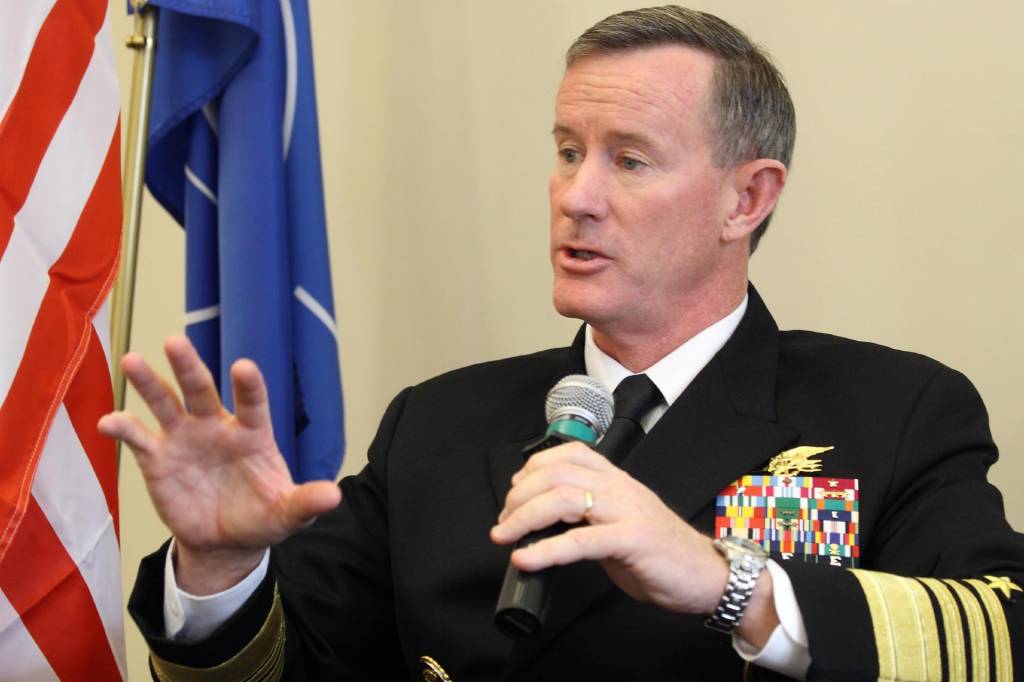 A few years ago, a retired Navy SEAL commander named Bill McRaven gave a graduation speech at the University of Texas. His words went viral. McRaven, who had been in charge of the mission to get Osama bin Laden in 2011, has since become the chancellor of the University of Texas System, and he’s also now a bestselling author.

Here are his 10 key pieces of advice.

1. Start your day with a task completed..

If you want to be successful in life, start by making your bed every day. McRaven talks about how in the grueling six-month Navy SEAL training, he made his thin bed according to his instructors’ meticulous standards, and how the habit sustained him for four decades. He also talks about seeing Saddam Hussein after he’d been captured by American forces in Iraq in 2003–and noticing that he never bothered to make the Army cot in his cell. “Sometimes the simple act of making your bed can give the lift you need to start your day and provide you the satisfaction to end it right,” McRaven says.

Every leadership book out there includes this advice, but McRaven has some of the best anecdotes supporting it. He talks about SEAL training again, focusing on how small teams of wanna-be SEALs were required to work together and haul a heavy rubber boat with them wherever they went.But years after training, when McRaven was a high-ranking commander and was badly injured in a parachuting accident, he learned what this really meant, crediting all of the people who forced him to believe in himself, to recover, and to save his own career-starting with his wife and including the friends who visited him and the senior admiral who helped him navigate the Navy bureaucracy. “You cannot paddle alone. Find someone to share your life with. Make as many friends as possible, and never forget that your success depends on others,” McRaven writes.

3. Only the size of your heart matters.

I’m barely 5-foot-7, so I love this advice: It’s more about the size of the fight in the dog than the size of the dog in the fight. In his speech at Texas, McRaven talked about his respect for a very tough crew of SEAL trainees, the tallest of whom was only 5-foot-5. In Make Your Bed, he talks about meeting one of the most decorated SEALs from Vietnam–a diminutive man who was a Medal of Honor recipient and who had gone behind enemy lines many times to save downed airmen. Before McRaven knew who the man was, he’d dismissed him in his mind because of his small size. That, he says, was a mistake: “It’s not the size of your flippers that count, just the size of your heart.”

Often, during SEAL training in San Diego, McRaven writes, the instructors would punish students for small infractions, or even no infraction, by requiring them to run fully clothed into the Pacific Ocean, then roll around in the sand until they looked like a “sugar cookie.” As a result, they’d face a very uncomfortable day, cold, wet, and sandy. “Do you have any idea why you are a sugar cookie this morning?” an instructor who’d punished McRaven asked him once. “Because…life isn’t fair, and the sooner you learn that, the better off you will be.” As McRaven writes, sometimes life just sucks through no fault of your own. The most successful among us accept it–and drive forward anyway.

5. Failure can make you stronger.

This is another one of those pieces of advice that you hear from many leadership experts, but it just has a little more oomph coming from McRaven. He talks about how failure literally made him stronger during SEAL training, when, as a result of coming in last on a distance swim exercise, he and another SEAL were punished with an extra two hours of physical training each day. The punishment was known as the “circus,” and it was no fun. But a funny thing happened, McRaven writes: While the circus could have broken them, it made him and his fellow SEAL trainee stronger. Eventually, they were the best swimmers in their class.

6. You must dare greatly.

SEAL training included a daunting obstacle course, and McRaven talks about how he had to be willing to dive down a 200-foot “slide for life” headfirst to have any chance of finishing it in time. It was risky, and scary–but effective. He also talks about one instance in which this same willingness to dare greatly led him to authorize an incredibly risky helicopter rescue of prisoners in Iraq. The mission was successful–but being willing to take risks means knowing you’ll likely fail at least sometimes. “Life is a struggle and the potential for failure is ever present,” McRaven writes, “but those who live in fear of failure, or hardship, or embarrassment, will never achieve their potential. Without pushing your limits, without occasionally sliding down the rope headfirst, without daring greatly, you will never know what is truly possible in your life.”

7. Stand up to the bullies.

McRaven talks about being scared of sharks during SEAL training–quite understandably, since the waters off San Diego, where they swam for hours each day, were full of them. Facing the sharks was just one price of becoming a SEAL. He also talks about another experience later in his career, again after the United States had captured Saddam Hussein in Iraq. Even as a deposed despot and prisoner, Hussein managed to intimidate the Iraqi leaders who came to see him. So, McRaven ordered him isolated and humbled, so that when the Iraqi leaders met him again, they wouldn’t be afraid. “In life, to achieve your goals, to compete the night swim, you will have to be men and women of great courage. That courage is within all of us. Dig deep, and you will find it in abundance,” McRaven writes.

8. Rise to the occasion.

Among other missions, Navy SEALs conduct underwater attacks against enemy ships. That requires swimming several miles underwater, “using nothing but a depth gauge and a compass to get to their target,” McRaven writes. It’s scary as heck. But the true moments of rising to the occasion, McRaven writes, came later–when he was commanding soldiers and SEALs and had to watch men react to the deaths of some of their comrades in arms. “At some point, we will all confront a dark moment in life. If not the passing of a loved one, then something else that crushes your spirit and leaves you wondering about your future. In that dark moment, reach deep inside yourself and be your very best,” McRaven writes.

McRaven talks about a SEAL training exercise in the freezing mud that pushed him and his classmates to the limits. Their instructors promised that if five students would quit, the rest of their class would be allowed to sit by a fire and warm up. Instead of quitting, he said, the students started singing, and thus inspiring each other to endure. Many years later, McRaven recounts losing soldiers in combat–and seeing the example of a Marine general named John Kelly as he met with families of the fallen. The general’s rapport with families came from his own tragedy, as his son had been killed in Afghanistan. “Without ever knowing it, John Kelly gave all those around him hope,” McRaven writes. “Hope that in the very worst of times we could rise above the pain, the disappointment, the agony, and be strong…. Hope is the most powerful force in the universe.”

Students in SEAL training can quit at any time–in McRaven’s class, 150 students began with him, and only 33 graduated. Symbolically, students who quit are required to go to the center of the training compound and ring a brass bell three times. On the first day of training, an instructor told McRaven and his classmates that his goal was to push them to ring that bell, but also told them: “If you quit, you will regret it for the rest of your life. Quitting never makes anything easier.” McRaven focuses on one time in particular when that lesson really became clear to him, when a 19-year-old Army Ranger under his command was wounded in combat and lost both of his legs. A year later, the soldier was still on active duty, never quitting, his prosthetic legs hidden by his uniform trousers. “Life is full of difficult times,” McRaven writes. “But someone out there always has it worse than you do…. Never, ever, ring the bell!”