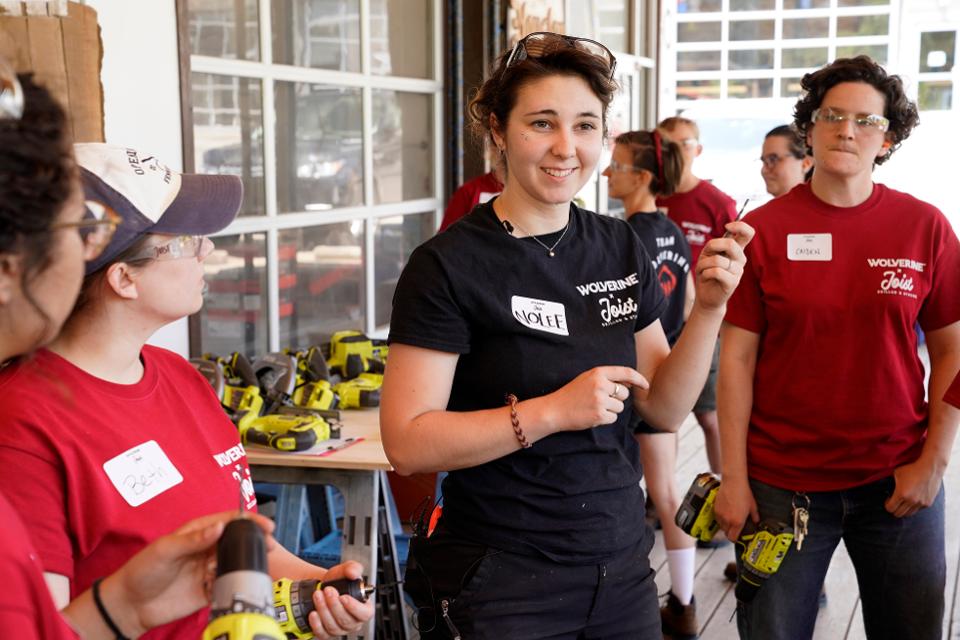 via FORBES.COM
by Cheryl Robinson

Nolee Anderson, founder of Joist and a professional carpenter, is dedicated to educating young women of the various career paths available to them through a skilled trade. Joist was created to offer young girls and women the exposure, excitement and encouragement to cultivate practical skills in a safe environment.

Based on a study conducted by Wolverine (known for making durable work boots for more than 135 years), only nine percent of high school students plan on pursuing the skilled trades profession, and 80% of construction firms state they are having trouble finding qualified workers. It’s imperative that mentorships, advocacies and programs like Anderson’s are put in place to help fill America’s skill gap. One of Anderson’s initiatives was as a contributing founder to GRIT (Girls Representing in Trades), hands-on workshops in the skilled trades, from construction and electrical to welding and auto mechanics serving middle and high school girls and non-binary and gender-diverse youth.

“It was set up to give high school girls an opportunity to have a really safe space to try out trades skills,” Anderson expresses, “and learn about them in a comfortable setting where they were not necessarily under the microscope of a wood shop class. It was to give them a space where they could just find out opportunities about trades work that they probably wouldn’t find anywhere else; that no one else would bring to them and encourage them to do it…Our goal was to tell girls that the trades were an awesome option, a profitable option and a satisfying one, too.” In addition to the basic trades skills, the organization just recently added a butchery class.

Initially, Anderson took a gap year between graduating high school and attending college. She was unsure of what she wanted to study. During that time, she decided she was going to go to art school to become an art teacher because that seemed like the most practical career path. However, she quickly realized she would not excel in that environment. Eventually, she enrolled in a carpentry and sustainable construction program. At the time, that particular program had three females in it. Anderson graduated in two years with a multitude of certificates and on-the-job training experience.

“I found myself in school a lot of the time when I was the only female on a certain project or in the shop during class being the first person to volunteer to do a task,” she smiles. “I knew if I was going to do it wrong, and if I was going to fail, it wasn’t because I saw them [her classmates] do it 16 times beforehand; then I’d be the girl who got up there and failed. I knew everyone in this classroom is afraid to try this because they’ve never done it before, and they’re afraid to fail. If I just get the failing out of the way, then we’re all going to be way better at this.”

In 2018, Anderson signed with Wolverine as part of Team Wolverine under its Project Bootstrap. Originally, the program visited job sites and trade schools, donating work boots to those who build America’s houses, roads and valuable infrastructure. The addition of Team Wolverine is to support individuals that personify the drive, grit and work ethic of those in the trades to help close the skills gap.

Although more women are entering the trade skill workforce, it is still often a challenge being the only woman in the room. Anderson continuously works on evolving her confidence. “I find myself in my head forgiving myself a lot of the time for being female and being in my position,” she humbly shares. “I’m like ‘you know, it’s okay that I’m the only me in the shop today. I just have to be okay with it.’” She is reconditioning her mindset from the notion that she has to know everything about the current project she’s working on to accepting that it’s ok if she doesn’t know everything.

As Anderson’s initiatives continuously gain traction, she shares three essential steps for young women looking to transition into the trades:

“My goal,” Anderson concludes, “is to keep generations that are following me from having to bear this trailblazer title. I just want to make sure that I make enough and take up enough room in any place that I can right now so that the girls following me don’t have to feel like they have the spotlight on them all the time. I want more tradeswomen to feel comfortable and to not think twice about being who they are and being able to hold these positions.”