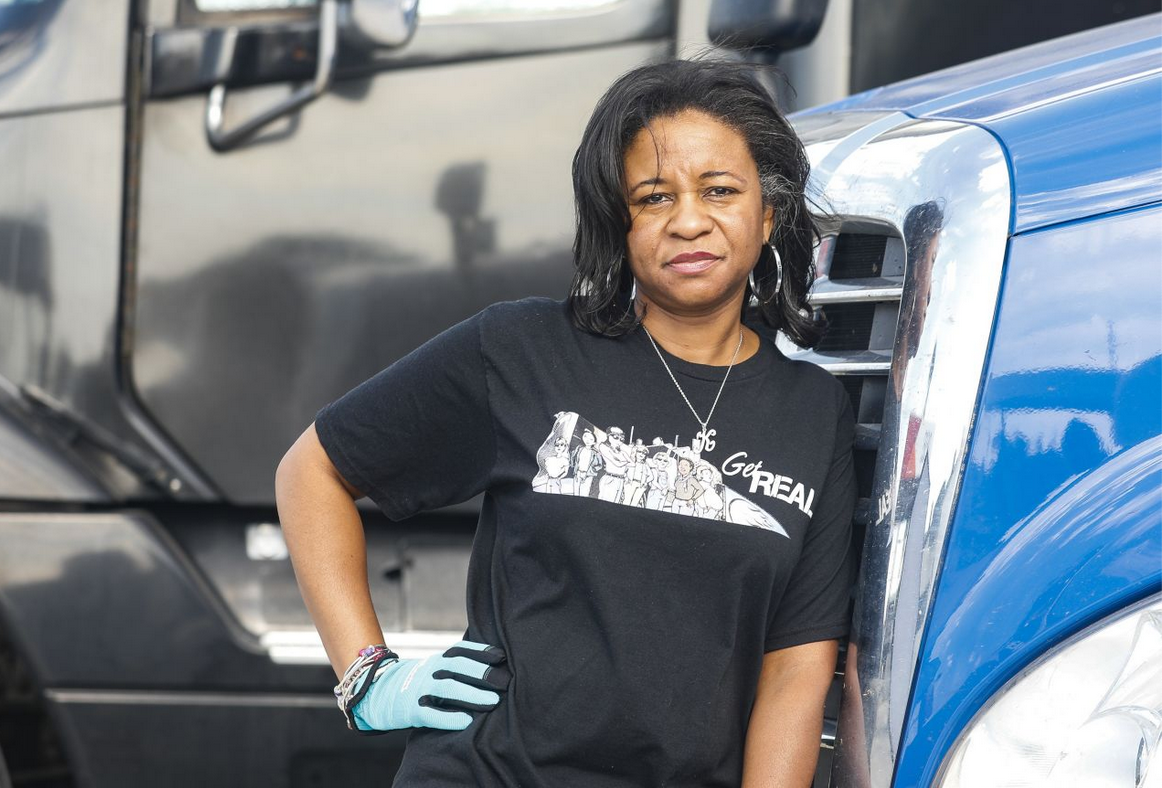 via wsj.com
By Sarah Chaney and Eric Morath

Kenyette Godhigh-Bell dismissed any thought of becoming a truck driver years ago when it appeared too daunting to break into a job where more than 90% of workers are men.

“You’ve got this cowboy-boot wearing, cigarette-smoking, tattooed or whatever white guy’s job,” she recalled. Now Ms. Godhigh-Bell, a 46-year-old black woman in sleek high-heeled boots, regularly pulls her 18-wheeler to Nebraska slaughterhouses so she can pick up beef and chicken for transport to grocery warehouses.

She is among a growing number of women taking jobs in blue-collar roles that have long been—and still are—mostly men, including police officers, construction laborers and electricians. A number of factors are driving the trend, including companies broadening recruiting efforts in a tight labor market to workers being drawn by better-paying jobs to women recognizing they won’t be alone.

The increase has been especially pronounced in transportation and material-moving, a field that includes truck drivers, delivery people and warehouse workers. In 2018, 43% more women worked in that category than in 2000, according to the Labor Department, and those gains accelerated the past five years as the labor market tightened. The overall number of women in the workforce increased about 15% during that time.

The number of women working as security guards, police officers and other protective service jobs also rose more than 40% since 2000. Women working construction jobs has increased 23%. 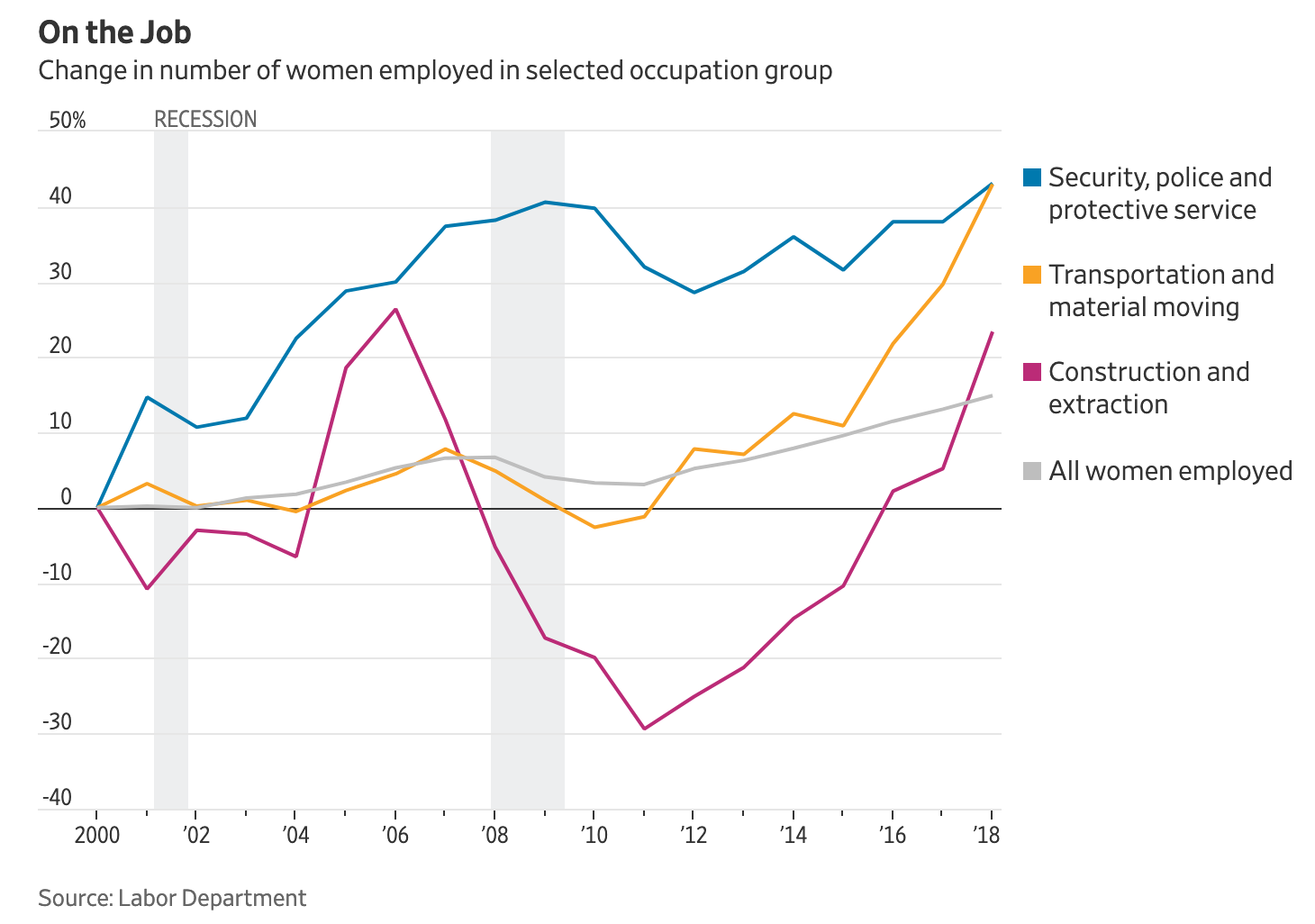 Now nearly 9% of truck drivers are women, the highest share on record back to 1994, according to The Conference Board, a nonprofit research firm in New York. The share of delivery drivers, electricians, plumbers and mechanics who are women has also recently touched the highest level in 25 years of records.

The gains, however, come with some risk. The share of women in some sectors, especially construction, has risen before in tight labor markets only to slip in the wake of economic downturns.

Ms. Godhigh-Bell, who swapped in her job as a real-estate agent for life on the road, intends to stick with her new career and has dreams of owning her own truck. It may never have happened, she said, if she hadn’t run into a truck-driver at a family reunion three years ago who told her he saw many women on the road.

“I like to do unorthodox things, especially things that women are normally not doing, from riding motorcycles to driving pickup trucks,” she said. “I am not afraid of a challenge.”

The fraction of women in the overall workforce is little changed from a decade ago, but the share in certain majority-male occupations is at a record high, including truck driver, taxi driver, plumber, police officer and auto mechanic. 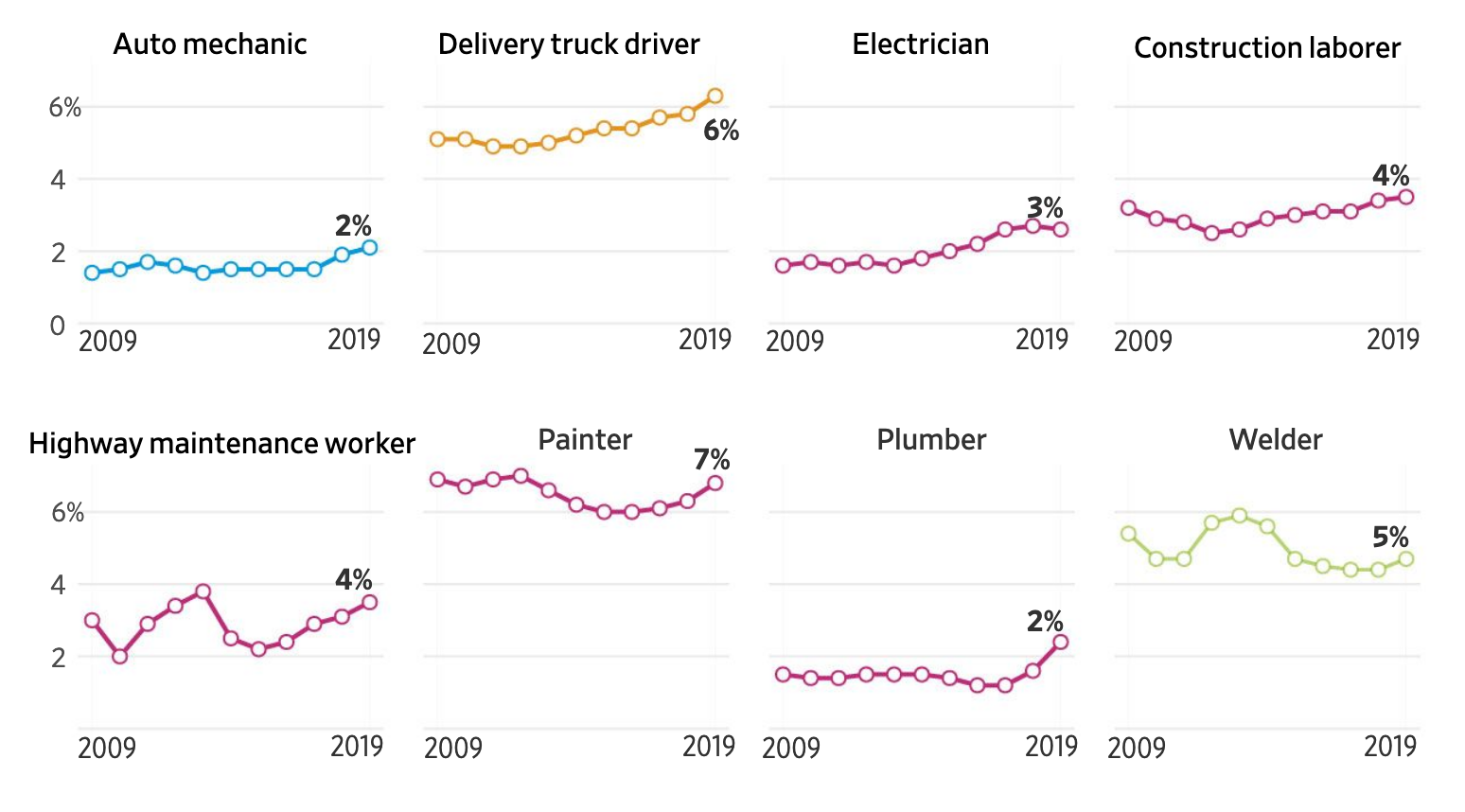 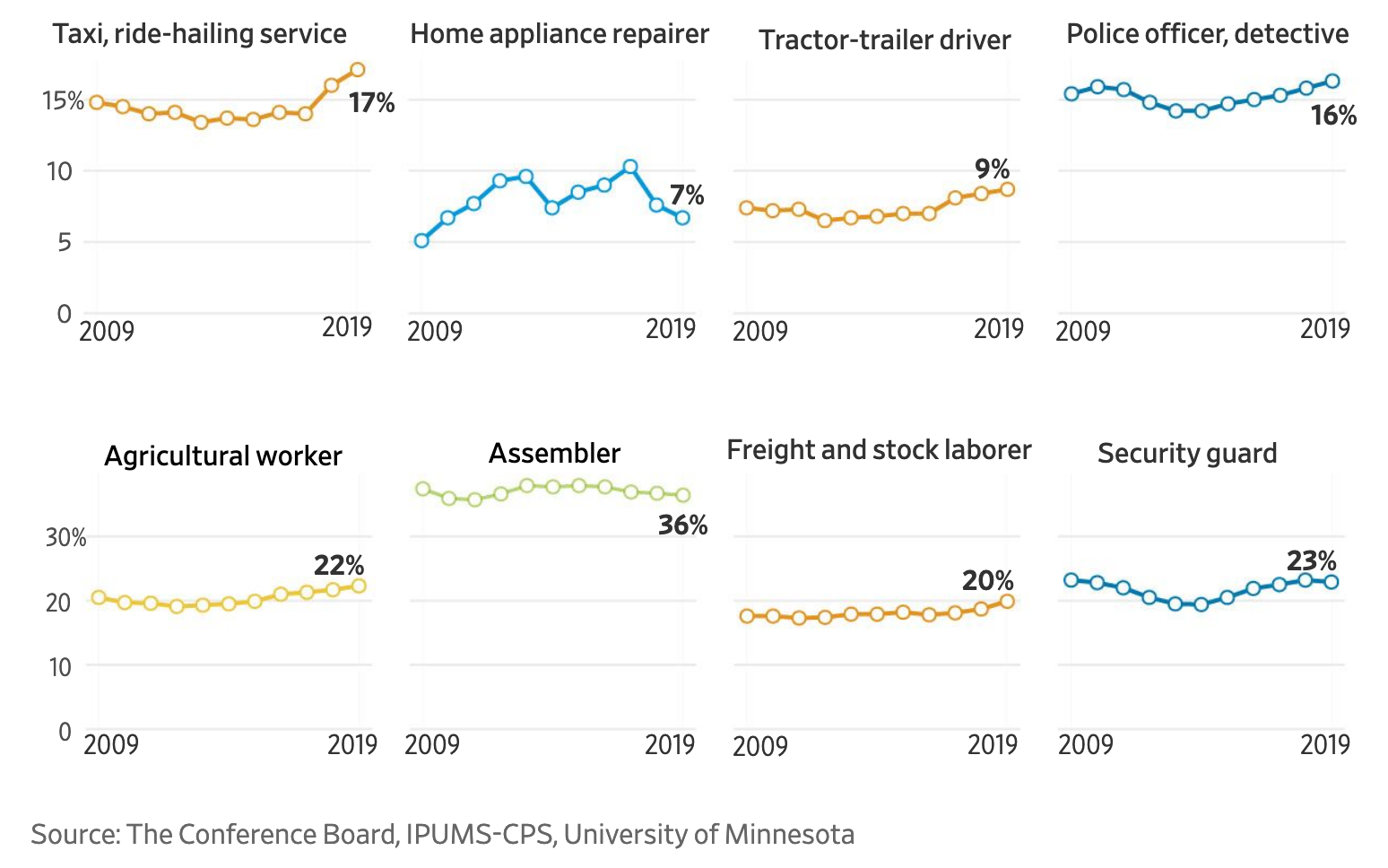 “That makes recruiting extremely difficult,” he said, adding that companies in blue-collar industries need to go beyond the typical pool of candidates. “Women, in many cases, turn out to be one of those groups.”

The rise of women in majority-male jobs reflects recent labor-force trends: Women have been driving the comeback in working-age labor-force participation, while participation among men ages 25 to 54—long the stalwarts of blue-collar jobs—has lagged behind. 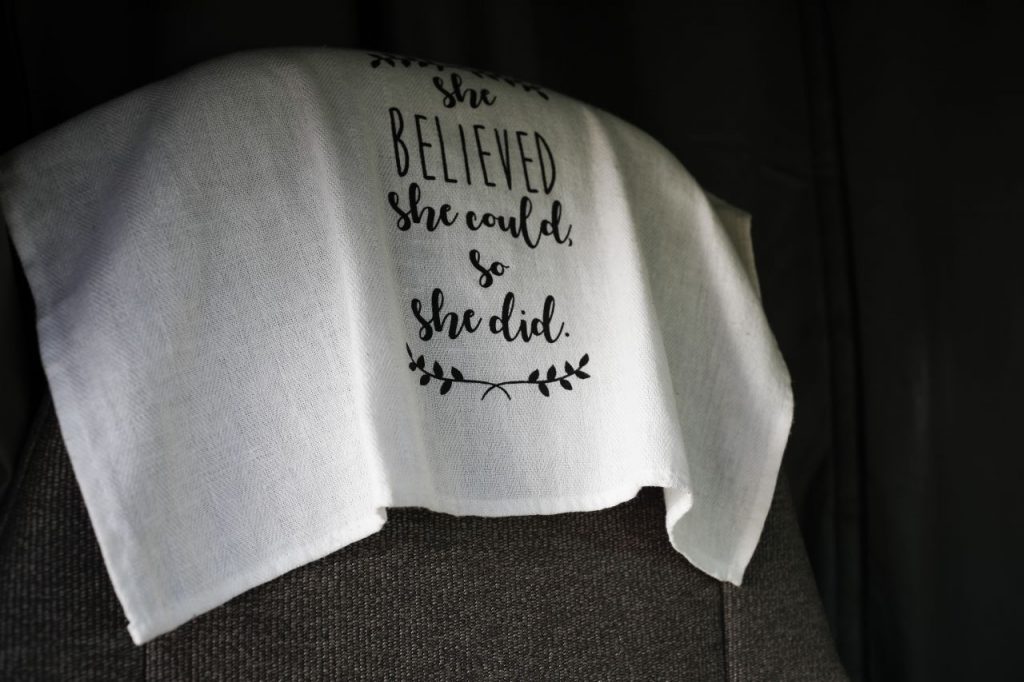 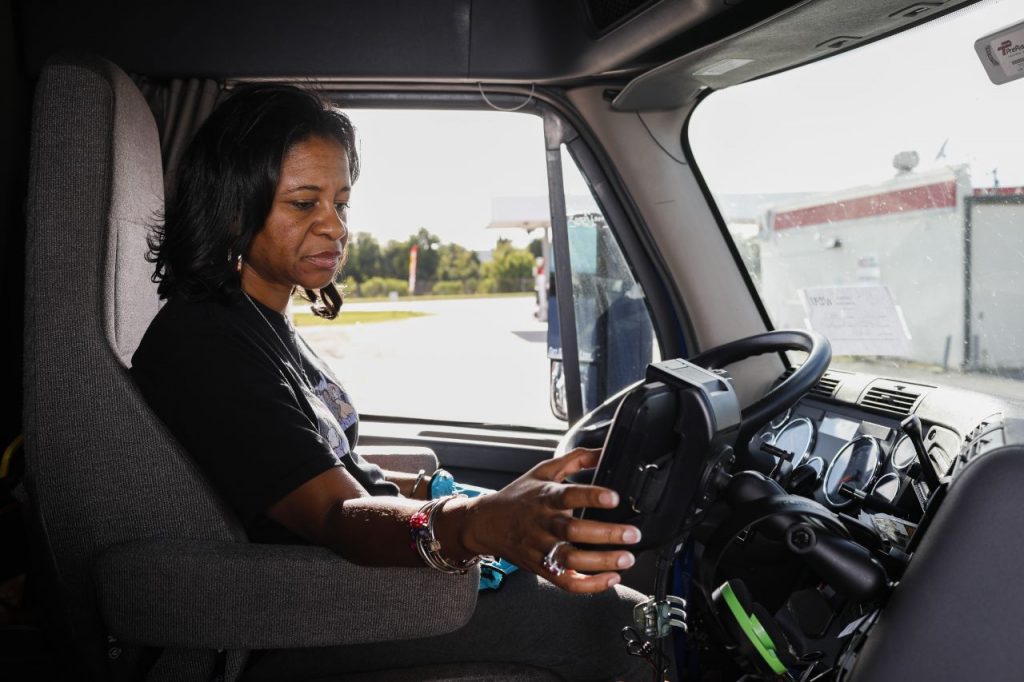 Kenyette Godhigh-Bell intends to stick with her new career and has dreams of owning her own truck. Photos: Eve Edelheit for The Wall Street Journal

Ryan D. Carter, executive vice president at Scotlynn Transport LLC, said the share of women driving in his firm’s fleet has nearly doubled from five years ago, to around 16% of all drivers.

“The women have been really good drivers,” he said. “And they’re staying longer [than men], which is great because trucking is a high-turnover industry.”

A recent industrywide requirement to electronically log drivers’ hours may also be helping, he said.

“You had some bullies out there that pushed drivers to the brink,” Mr. Carter said. “With electronic monitoring, that doesn’t happen.”

Another reason for the rise of women in certain blue-collar fields could be a heightened emphasis among job-training programs on preparing women for such jobs, industry experts say.

Julie Kuklinski, head of Women in Construction, a Biloxi, Miss., organization that provides job training, said many women they assist had previously been steered toward roles such as nursing assistant, hairdresser and cleaner.

“Those are all admirable jobs, but they don’t pay a living wage,” Ms. Kuklinski said.

There were 477,000 unfilled manufacturing jobs in February and roughly a quarter-million open jobs in construction and in transportation-related fields, according to the Labor Department. Construction workers earned a median wage of $22.12 an hour last year. Truck drivers earned $18.66. Personal-care aides, another job that requires some training but not a degree, earned $11.55 an hour. More than 80% are women. 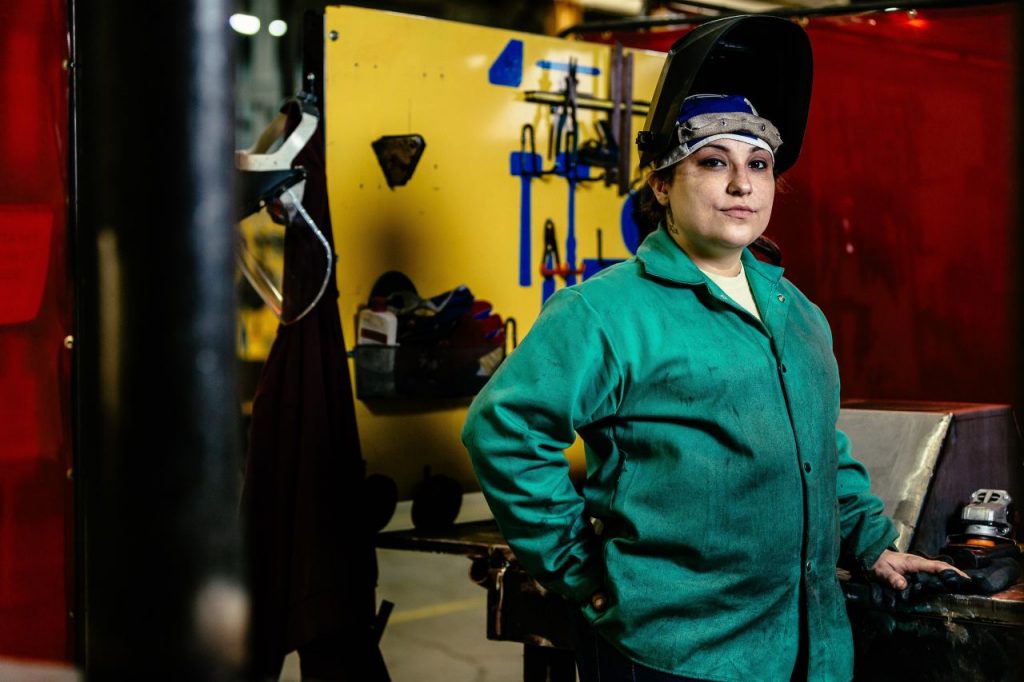 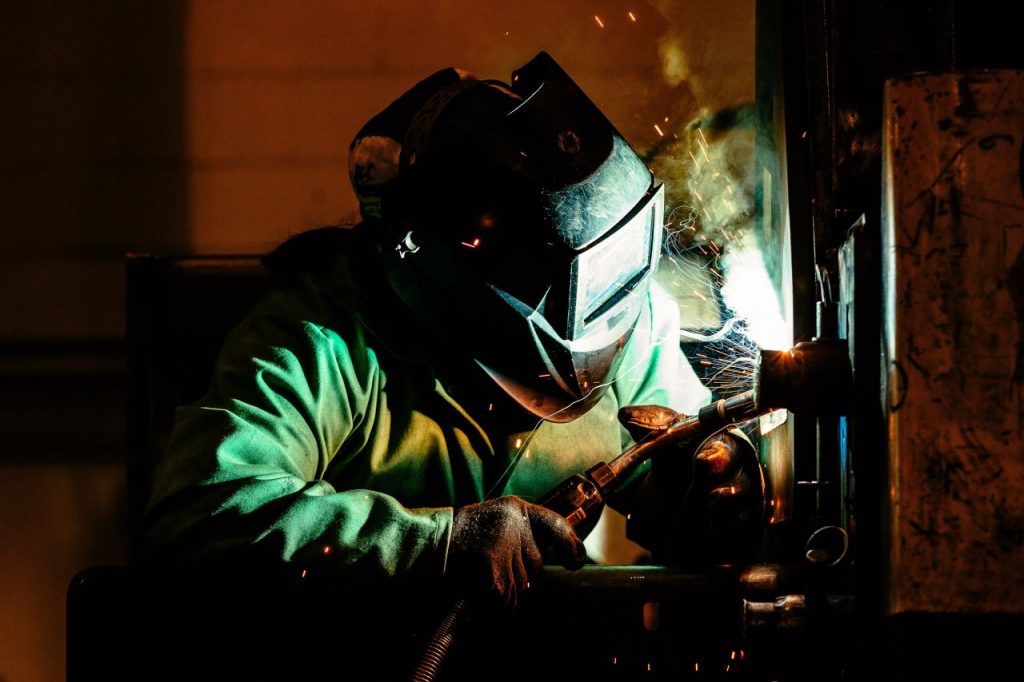 Kamie Macias, of Hammond, Ind., was guided into a blue-collar sector where women haven’t seen a recent uptick: manufacturing.

The 28-year-old with three children said she was looking for a better-paying job after serving pastries and coffee at a Dunkin’ Donuts store for seven years. She sought out job training at Goodwill Industries. Career coaches offered her two paths: nursing assistant or welder.

“I didn’t want to wipe old people’s butts the rest of my life,” she said. Ms. Macias pursued welding training and recently started working at Hoist Material Handling’s factory in northwest Indiana, just outside of Chicago. She is earning $8 an hour more than she did at Dunkin’—and more than her husband, who works at a butcher shop.

“He wasn’t really excited about that,” she said. “But now we’re not struggling to pay the bills.”

Moving to a more lucrative field presents a risk: jobs in construction, transportation and manufacturing are more susceptible to economic downturns. 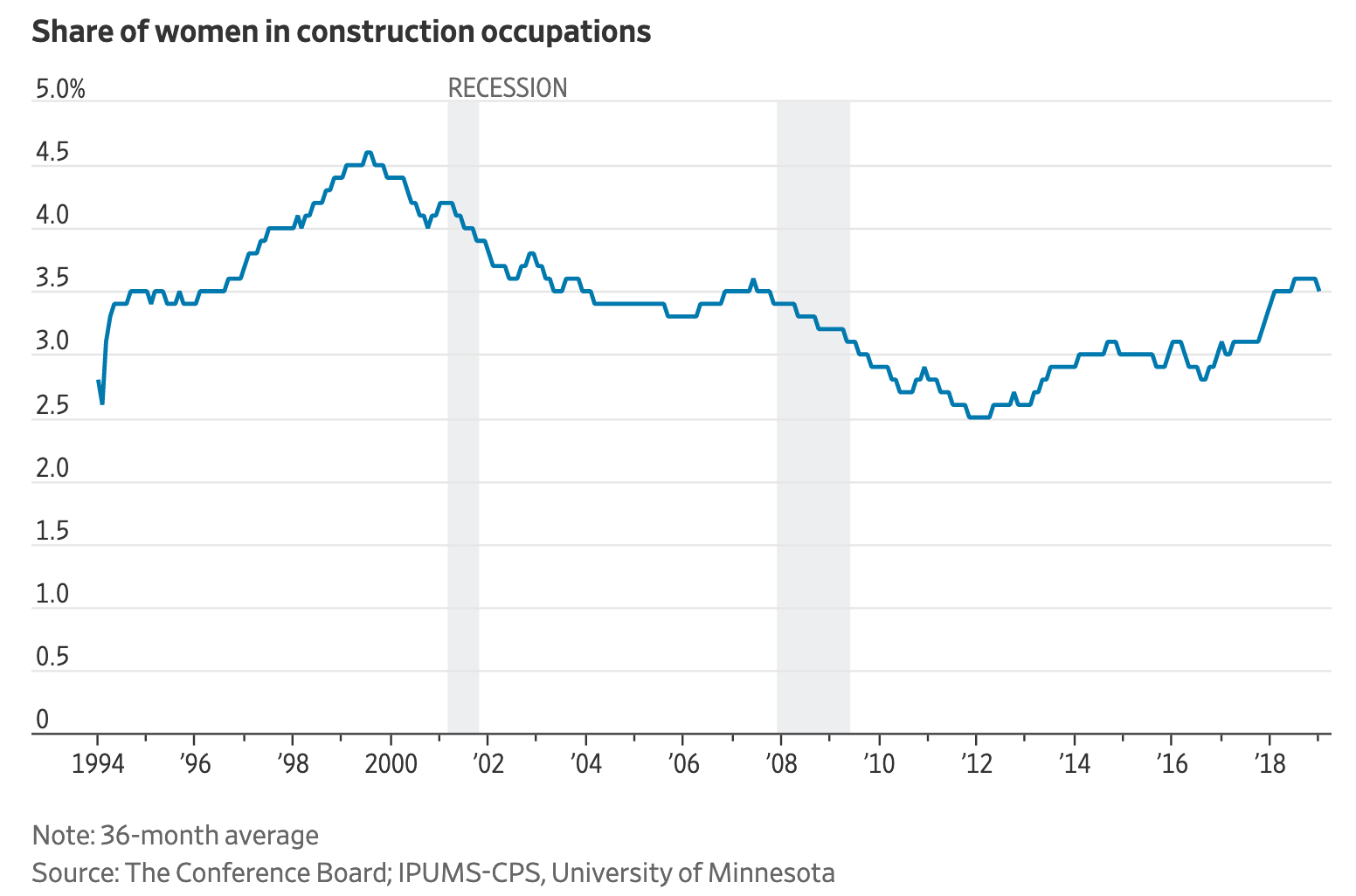 In the 2007-09 recession, female construction workers disproportionately lost jobs in the industry compared with men, according to an Institute for Women’s Policy Research analysis. Ariane Hegewisch, IWPR program director of employment and earnings, attributed the phenomenon to discrimination. In construction, men more often find jobs through family networks, she said.

Since the 1980s, professional occupations such as veterinarian have changed such that women now lead men in proportion after lagging far behind, but women have yet to make such strides in blue-collar occupations because of barriers to entry, Ms. Hegewisch said.

“In blue-collar jobs, you rely much more on your colleagues to gain the skills,” Ms. Hegewisch said. “You cannot go to school and show that you can do it and be let in.”

Intimidation, outright harassment and discrimination are among the barriers to women entering blue-collar fields.

“The foreman was like, ‘What am I going to do with a girl?’” Ms. Mulligan recalled.

He assigned her to make coffee runs for the construction crew each morning, even as less experienced men joined the crew.

“This is a very typical experience” among women, Ms. Mulligan said.

Eventually another woman took the duty, and Ms. Mulligan moved to a new project.

Building construction expertise allowed Lateasha Davis, 31, of Nashville, Tenn., to reap wage gains after a decade in housekeeping. She finished a six-week construction training program last spring and landed a position at a hospital construction site, where she was responsible for keeping hallways clean during demolition of operating rooms.

While on that job, she scored a raise of $2 an hour to $15, and moved on to another project that had her working with tools and drilling holes alongside male workers. She says she is proud to serve as a role model for her four daughters and one son.

“It’s exciting for me to be able to show my children that they can do anything,” Ms. Davis said. “It’s also exciting for my boy because I can teach him some things that he probably didn’t think Mommy knew.”